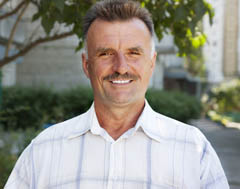 Being told you have prostate cancer when you’ve had no symptoms what-so-ever is terrifying; I was very shocked as I didn’t realise there was anything wrong with me. It didn’t just affect me, my family had to go through it all with as well and I knew they were very worried.

The available treatments in the U.K weren’t explained all that well, in the end it was recommended that I underwent the Robotic radical prostatectomy with a 3-4 week wait before I got the operation. Following a consultation with my specialist I decided to research alternative forms of treatment as I didn’t like the side-effects of conventional treatments.

I did mention proton therapy to my specialist but he said it wouldn’t work for prostate cancer, however this didn’t stop me researching it online.  I soon realised it had very little side-effects and all the feedback was positive, whereas with the NHS I felt like all the treatments were a negative.

Since treatment I have realised how many positives proton therapy has and now I still have my sex life intact and my bowels and bladder are in good working order also.

My treatment lasted 5 fractions and the team at the Proton therapy centre were just brilliant, there were some short-term side effects such as: Feeling sick at the first stages of treatment which was about as bad as it got and about 2 weeks after my treatment I experienced what felt like constipation – but I did manage to open my bowels eventually, I just had to be patient. However now I’m a little the other way and have to go straight to the toilet when the need arises, Ejaculation is very quick in the morning but that’s not really a problem.

I would recommend Proton therapy to anyone that found themselves with the same diagnosis; I have all the same bodily functions as I did before the treatment, which would not be the case with what was offered by the NHS.

(Disclaimer: The patient image is for illustration only- this patient is happy to share their story but would like to protect their identity)