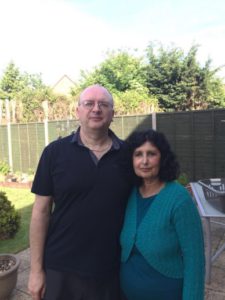 Sylvia White from Southampton diagnosed with a rare form of cancer says she’s been given a new lease of life after pioneering treatment abroad. She was hit with the devastating news she had a tumour behind her nose in 2014. Sylvia underwent months of gruelling chemotherapy and image-guided radiotherapy but the cancer had returned.

To kill the cancer cells she underwent seven weeks of chemotherapy and image-guided radiotherapy in Southampton. After the treatment Sylvia and her family were faced with an anxious wait to see whether it had been successful. She was initially given the all-clear but tests showed the cancer had returned. Sylvia was then faced with the tough decision of agreeing to yet more exhausting treatment in the UK, or cutting edge proton beam therapy in the Czech Republic.

Unlike traditional radiotherapy, proton therapy targets and kills cancer cells while sparing the healthy tissue surrounding the tumour. On the advice of her doctors Sylvia travelled to Prague for nine weeks of treatment, covered by her BUPA health insurance. She is now cancer free.

Husband Neil said: “We were given the option of having something with fewer side effects but effectively with the same outcome – she was going to be treated for a cure. That’s why we chose proton beam therapy, even though at the time it meant nine weeks away from friends and family.“

“We had all the natural fears you would get. It was a city Sylvia hadn’t been to before and we didn’t know a great deal about, and we had worries about the language barrier. It was a very big decision for us to make. It wasn’t taken lightly. We decided to go straight over there and stay there. Everything happened very quickly in those first few days. It was fantastic.”

“I am grateful for everything they have done for me in the UK but there is something about Prague. I just felt safe straight away. We didn’t have to say anything, they just looked after us. They are a superb and highly professional team.“

“I didn’t lose hair, I didn’t lose any weight. I could eat anything I wanted, all the time. In the UK I could hardly walk while I was having treatment. In Prague it wasn’t like that at all. When I went in for treatment I clearly wasn’t very well. But when I came out I was vastly improved. I can get on with my life again.”